If you want to understand what’s up with France today, look no further than the highly entertaining and surprisingly funny social drama, THE DIVIDE.

Raf and Julie (Valeria Bruni-Tedeschi and Marina Foïs), a Parisian lesbian couple on the verge of breaking up, find themselves in an emergency room when Raf fractures her arm after one of their ugly arguments. The hospital is on strike, nurses and doctors still providing care while wearing “On Strike” armbands. Kim (Aïssatou Diallo Sagna, winner of the 2022 César for Best Supporting Actress), an empathetic nurse, is back at work for another night shift, while her husband is trying to take care of their sick infant at home. Yann (Pio Marmaï), a truck driver who got injured by a tear gas canister explosion during a Yellow Vests demonstration, has also been brought to the ER, along with many other demonstrators.

Staff is overwhelmed and patients are angry. Outside, violence is still escalating between the police and the demonstrators, and the hospital staff is asked to take sides. The night will be long...

THE DIVIDE uses the ER as a microcosm of French society, one of these few remaining places where citizens from various cultural and social backgrounds are forced to meet. During one night, the encounters between flawed characters who never should have met makes them all confront their beliefs and prejudices. The film takes place almost entirely inside the hospital, yet it never feels static thanks to director Catherine Corsini's handheld camera work.

THE DIVIDE was nominated for six César Awards (the French Oscars), including Best Film, Best Actress (Bruni-Tedeschi), Best Actor (Marmaï), and Best Supporting Actress (Aïssatou Diallo Sagna). A professional nurse, Diallo Sagna is the first non-professional actress to ever receive a César Award. THE DIVIDE was also awarded the Queer Palm at the 2021 Cannes Film Festival. 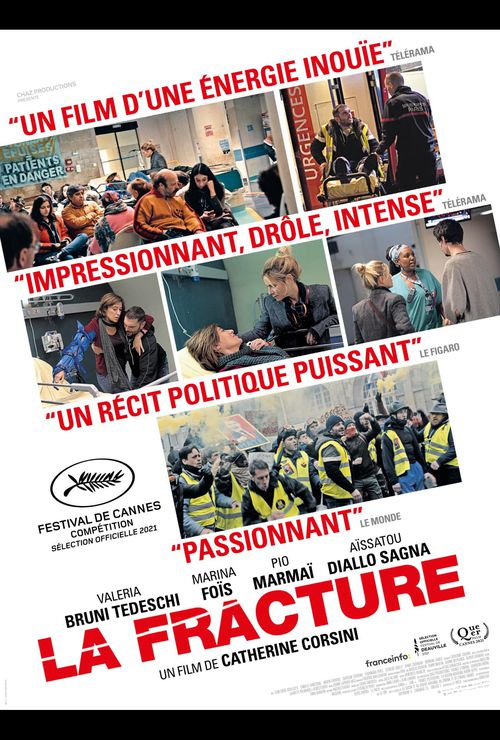